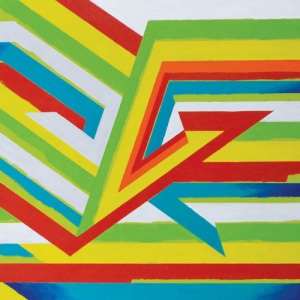 all songs written by I. Ba, B. Barnett, A. Fall, and R. Loiederman

Superb album, bursting with joy and experiment. All put together more as a recording project than an actual band, with two griot-background Senegalese providing lead vocals and kora, a Cuban on vocals, and two LA Americans on “beats, keyboard and electronica” and guitars, organs, percussion and backing vocals. So there’s the canvas and paints. What sings out as the CD proceeds is the affinity that comes from musicians who mutually inspire. It doesn’t really matter so much what makes what or from where as what heart and art goes into what. So you get a deep growly electronic slab of riff with bubbles of kora bursting overhead that leads into a few bars of soukous guitar and a voice that sounds like Baaba Maal’s brother. That good. And all the potential clutter of a production like this doesn’t get a chance to root – the housekeeping and editing is sharp and clear. Every element gets space to be heard. Delicious music.

Senegalese griot styles, Cuban sassiness, Afro-funk power, slamming dance floor beats and swirling layers of electronica are all thrown into a melting pot by the hybrid San Diego-based collective Faba Loba.  If it sounds like a recipe for a complete disaster, in reality it turns out to be ridiculously good.  The kora playing of Amadou Fall and the soulful Wolof voice of Ibou Ba (both of whom also perform as the California-based duo Sene Africa) provide much of the melodic impetus.  The funk comes from Beston Barnett’s subtle guitar and organ fills, the rhythmic intensity from the dance floor grooves and remixing of beatmaster Rafi El and the Cuban spice from the rumba choruses of backing vocalist Lica Cardona.  The diverse elements are calibrated perfectly and the fusion reaches its apotheosis on ‘Dale La Piñata’, on which Ba sounds uncannily like Youssou N’Dour as he wails soulfully over an infectious, dubby hip-hop beat laced with sparkling kora arpeggios and Cardona’s Cubano choruses.  The title-track is almost as good, a funk-fuelled cut-up on which the musical traditions of Dakar, Havana and Los Angeles collide with thrilling urbanity.

… ART HURTS, over the years